The following shows the process boundaries 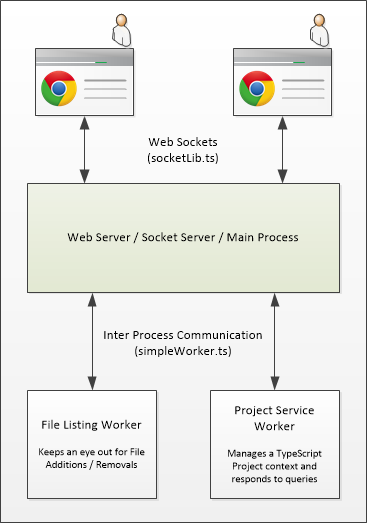 We have two libraries to manage this (designed for simple RPC) and both of them follow the same principle of QueryResponse async programming.

There are NPM libraries for such stuff but none written with the requirements of TypeScript in mind.

On thing to note is the as long as its runtime dependencies allow it gotcha (e.g. some function might depend on fs and you don't want to import such a module on the client). This is not always true, so we just create a pseudo object and call it contract. The calling side needs to do nothing with this object (except mutate it as documented), but the called side needs to provide a concrete implementation.

The contract can be two way by just having two contracts. E.g. for a socket : client -> server and server -> client. Having a contracts separated from implementations also means that we don't have to deal with cyclic dependencies when writing the implementations.

To take the contract + implementation and work the magic we have two libraries, socketLib and simpleWorker, that work over sockets and IPC respectively.

Basically anything that is async in its contract can be used under the same principle. Our socketLib allows us to convert events raised from the server become events that are emitted (cast) to all the clients. Great for stuff like an up to date error list, file changes etc.

We use socketio in the frontend. Checkout the socket folder which contains the socket contract + server + client :rose:

Checkout the example fileListing worker. Here is are the snippets you need to create a new worker:

You generally want to export a start function in the master and just call that to ensure that master file is loaded (hence worker started).